[ENG] It is becoming more apparent that there should be greater focus on reproducible and transparent research. In light of recent* public exposure of scientific research that raised concerns of reproducibility and transparency of data, I as an early career researcher (ECR) feel that this “topic” should be at the forefront of the minds of all ECR’s.

The concept of reproducible and transparent research has been on my mind for some time and I was keen to attend the launch event for “Reproducible Research Oxford (RROx)” in January (a bit fortuitous, given recent events). It was a really interesting event that explained not only how they came about but also bringing together people from various parts of the research environment to discuss their own involvement in reproducible research. This blog is one of two. Here, I briefly summarise the launch event and add a few thoughts of my own. The second blog will be by Sara Middleton, and she will provide her view, as an ECR, on the event and the topic of reproducibility and transparency of data.

Figure 1. Left: One of the speakers, Brian Nosek, highlighting what steps need to be taken to initiate a change in research culture. Right: Brian showing how these steps would initiate change in the scientific community.

The first talk at the launch event was given by Dorothy Bishop. She opened with the landmark finding by the Open Science Collaboration (led by Brian Nosek; Open Science Collaboration. 2015. Science, 349, aac4716) that only 1/3 to 40% of psychology studies gave the same result when they were reproduced. This highlighted a potential “problem” in that many research studies may not be reproducible. She said that this finding was the instigator to address the issue of reproducibility which she raised with colleagues at the Academy of Medical Sciences (AMS) symposium in 2015. Following this meeting there was a push to actively address the reproducibility issue and through funding, collaborations, training and large ECR involvement RROx was established (a timeline of seed stage to launch of RROx is shown in the text box below). In 2018, RROx became a signatory of the San Francisco Declaration on Research Assessment (DORA), which is a set of recommendations to improve the ways in which output of scientific research is evaluated. What I found exciting was that the RROx committee included one ECR from each division at the University, showing the importance of ECR involvement but also the realisation that ECRs will be important in driving reproducible research into the future. This was further highlighted by the work already done by ECRs in promoting what RROx is trying to achieve, an example of this is the ReproducibiliTiea initiative where ECRs inform and discuss the issue of reproducibility with other ECRs within divisions and departments. Dorothy’s talk was followed by Malika Ihle (coordinator or RROx) and Amy Warner (from the Bodleian library). Malike is an open-research ambassador and part of her role is to survey the awareness, practice and needs of researchers. What I found particularly interesting is that she has access to an inventory of current initiatives focusing on promoting reproducibility. Also good to see was the role she would be playing in liaising with stakeholders about relevant policies. Amy’s talk was showcasing the Bodleian library and their commitment to open access and an open research culture. This was really encouraging as the involvement of the Bodleian with RROx showed a shared interest of promoting reproducible research throughout the University. 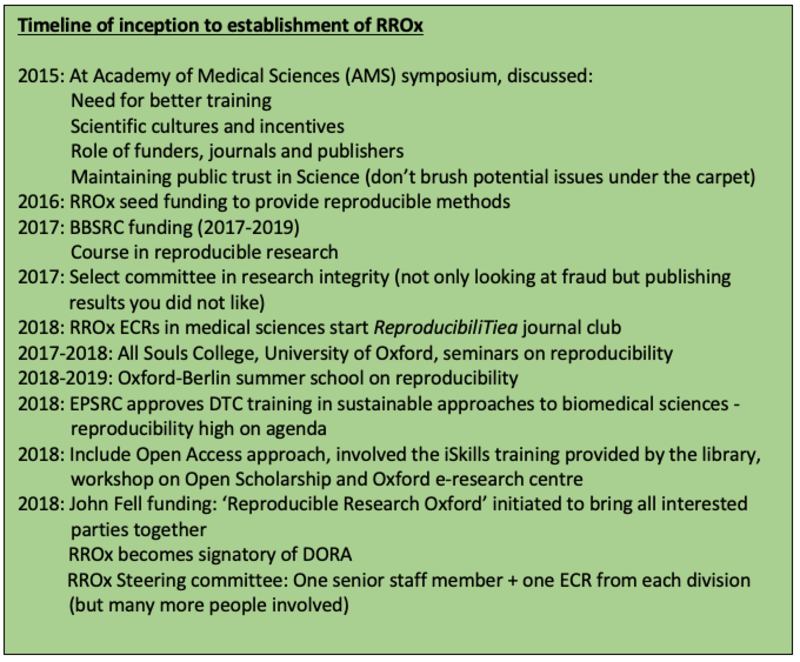 The promotion of an open research culture beyond RROx and the University was made apparent by representation from UK Reproducibility Network (UKRN) and UK Research England (UKRI). The UKRN was represented by Laura Fortunato. The UKRN is a fairly new initiative with their first annual meeting held last year and, since then, they now have 10 member institutes as part of the network. Laura explained that UKRN provides the opportunity to improve research by reforming culture and practice, with the aim to work collaboratively, not competitively, and strive for broad disciplinary representation beyond sciences. But this raised the question - what does research reproducibility mean across disciplines? This is not a straightforward answer and the UKRN has implemented a conceptual framework to try and address what reproducibility means. The framework has three parts: 1) Methods of reproducibility, 2) Reproducibility of results and 3) Inferential reproducibility (to draw consistent conclusions from analysis and replication). At the moment UKRN are currently focusing on 1 and 2, and Laura explained that only when the first two parts of the framework have been resolved will the UKRN move on to 3. Laura also announced that the UKRN will be holding a conference from 9th – 11th September, entitled “Reproducibility, replicability and trust in science”, I suspect the conference will be stimulating and hopefully there will be a good attendance. The UKRI was represented by Claire Fraser. Claire is a senior higher education policy advisor and she discussed the role of open and reproducible research in the REF. To be honest I was somewhat surprised that reproducibility was on the radar of UKRI, to the extent that it would play a role in REF.  Apparently, the UKRI policy work (which includes open research) does cross over into REF and that open research does not just mean open publication but also a route to transparent, efficient and reproducible research. Another point that Claire made, one that was apparent throughout, was that incentives drive behaviours and that this impacts research and reproducibility. She discussed the role of funders and how they assess research excellence, which is important because this impacts behaviour of researchers and how they would approach reproducibility. The message was that research assessment should assess content of specific papers and not indices like impact factors and the like as surrogate measures. There was one point that Claire made that resonated with me and that is something that needs reassessing – all stakeholders need to measure what we value and play a role in facilitating cultural change. 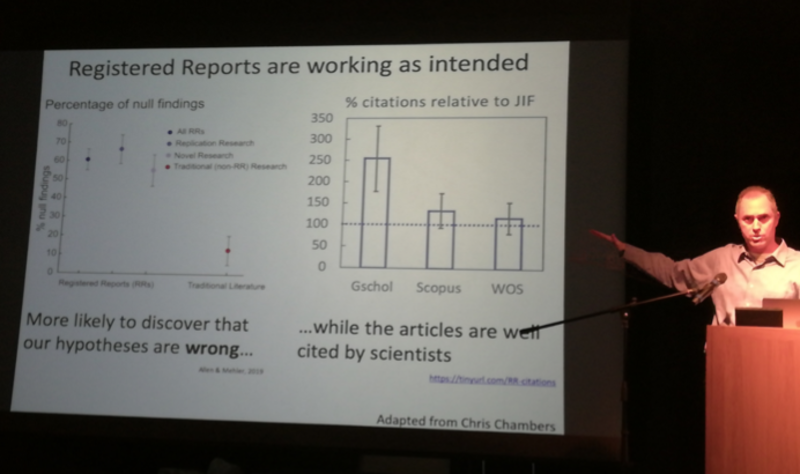 Figure 2. Brian Nosek highlighting that the 'Registered Reports' initiative is working and research is been cited by scientists.

The final two talks of the day were really interesting and were given by two researchers who are on the frontline pushing open and reproducible science. The first was by Stephen Curry, someone who’s online content I have been following for a while, and so I was really excited to hear him speak. Stephen is a Professor at Imperial College London and chair of the steering committee for DORA. In his talk, Stephen raised the point of value in research and that there needs to be a change in research culture and research evaluation. He proposed shared research values where: 1) research is reliable, rapidly communicated, accessible and of high quality; 2) researchers collaborate, have a duty of care to group members and colleagues, and a responsibility to the societies of which they are part of; and 3) the research system values the people within it, cares about their quality of life, and seeks out the creative vigour of diversity. What still astonishes me is that this is a proposal, whereas it should be the norm. It is an indication of a broken system that is our research culture, I believe (and have done so for some time) that it can be changed. I also believe many ECR’s feel the same way but it should not be up to the ECR’s alone to force this change. Stephen offered a practical solution of engaging in the open science discussion: Preprints, open peer review, open access generally and data sharing. Naturally this leads to important questions about democratic accountability but this is where DORA as a campaign addresses the way forward. I would highly recommend visiting their website to see the initiatives they are taking to ensure shared research values.

The final talk was given by Brian Nosek form the University of Virginia, co-founder and director of the Centre for Open Science, and leading contributor to the landmark paper showing the problem of lack of reproducibility in science. The message that Brian was indicating was that often incentives in research are for individual success, to get it published not get it right. He advocates for a change in culture and he says that this can be achieved and suggested steps to do so. First, if the infrastructure is made available then it makes it possible for the innovators to start the change. Secondly, through experiencing the change early adopters will promote the change. Then, through the community the change will be made normative and the early majority will take on the change. Through incentives, adopting the change will make it rewarding to the late majority and finally by initiating policy the laggards will be required to institute change. Brian gave an interesting example of an initiative that was implemented by the Psychological Science journal where a visual badge system was used to indicate openness of data and material and whether manuscripts were preregistered. Since the implementation of the system in 2013 one quarter of journal papers in 2019 have a preregistered badge, half have an open materials badge and 60% have an open data badge. Another initiative is Registered Reports, where peer review is done at the design and conception of the manuscript before data is collected and analysed. This will result in accuracy rather than beauty of reporting, publishing of negative results, conducting replications and that peer review focuses on the quality of the methods. Although still somewhat of a novel approach Brian did show some evidence that Registered Reports were working and being cited by scientists. What became apparent from Brian’s talk is that there is evidence of cultural change as more researchers are posting online materials and data while also preregistering analyses or hypotheses. However, he did stress that having grassroots campaigns are important. Visibility is essential for changing norms and we have to highlight open science as good practice and not as social identity. Two points Brian made is how I think we should do science - embrace incrementalism and cultivate intellectual humility.

*Please note that at the time of writing this there has been no evidence of intent to falsify data or mislead by the party involved and the relevant investigations are still ongoing. Since the initial awareness of the problems surrounding the data were made, the approach taken by journals and collaborators that were impacted are made clear here and here. 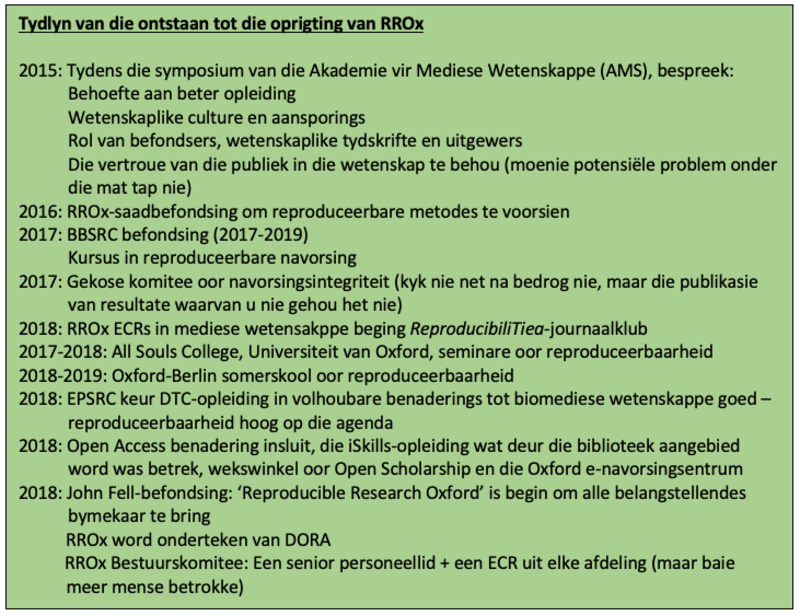