[ENG] Towards an open and reproducible research culture: an ECR perspective

This blog is the second part to Jacque Deere’s piece

Is science research in crisis?

Both #spidergate and the public retraction of Nobel Laurette Professor Frances Arnold’s paper on enzymes at the start of this year has reignited fresh concern over the “reproducibility crisis”. This so-called “crisis” stems from the results of an online survey by Nature in 2016 where more than 70% of the 1576 researchers surveyed were unable to reproduce another scientist’s experiment. Academic Twitter inevitably exploded with a mix of worry and denial.

As an early career researcher (ECR), just starting out in the field of ecology it made me question the role of science in society and my own scientific journey and daily practices. After some reflection I realised that I had never received formal training in reproducible and Open Science until I started my PhD. Throughout my undergraduate and masters degrees, I was taught programming or different lab/fieldwork techniques but almost always in the context of a particular research module and not how these skills fit into the wider science framework.

Open Science is a steadily growing movement which strives to create a research environment where openness, integrity, and reproducibility are at the forefront when conducting science. Open Science is facilitated through conducting research in a FAIR way by ensuring Findability, Accessibility, Interoperability, and Reusability in all project elements, from the project inception to the final dissemination of research outputs. Examples of some of these practices would be pre-registered reports, reproduceable workflows, data documentation, Open Access publishing.

Fast forward to early 2019, and the importance of reproducible and Open Science was made clear to me when I started to conduct my own meta-analysis. Meta analyses rely on extracting and combining data from other people’s studies which asks a similar question to find broad patterns. I noticed quite a few papers lacked a detailed meta-data table or had not reported a full species list, which meant I either had to exclude their study or write an email to the authors asking for the data, which had mixed success. Through extensive reading on the meta-analysis process, attending a meta-analysis course in Sweden, and lab group discussions it made me question what is the point of science? Why do we scientists often conduct complex lab experiments or field campaigns, but we don’t always openly share our data? Doing a bit of digging into the why of these questions uncovered a lot more than just openness and reproducibility in science, but also the culture in which the science takes place.

Publish or perish is paramount

My perception from entering the world of academia is that things beginning with P are paramount: from the “publish or perish” culture or obsession with P values and mostly showing positive results. In addition, the strive for research novelty over replication has further put into question the role of science for some researchers. It feels almost like I’ve entered into a marathon but sprinting the whole way to the finish line – tenure? I pursued a life of studying science out of curiosity of the natural world and wanting to make a difference to society, (I suspect that is the case for many scientists if you ask them). It seems as we climb up the tree of academia towards the canopy, you enter this cycle of pressure to publish impactful science in order to get grant money to carry out more science, all this in order to remain in a job. This model of doing science is impacting our wellbeing (and our science)

At the Reproducibility Research Oxford (RROx) launch event in January this year, there was collective desire for change towards a more positive research culture. The event brought together a diverse group of researchers at varying career stages across the University. From the numerous presentations and group discussions throughout the day, it was evident that the movement for change was energised by early career researchers. Initiatives such as “Reproducibiltea” Journal Club, which involves critiquing journal articles whilst drinking a hot beverage of choice was set up by graduate students at Oxford. The final speaker of the event was given by Brian Nosek, director of the Center for Open Science who summarised how Open Science practices are intertwined with the research culture at institutions and the value we place on them. To ensure we have an open and reproducible science, means we have to change the conditions around which that science takes place. Nosek advocates for a research model that places a higher value on collaborative and higher-quality science over individual success (quantity of publications). Change, he highlights, will come top down (e.g. publishers requiring original data and code to be published with manuscript) and from grassroots (e.g. increased uptake of pre-registered reports).

Opportunities for ECRs to engage with Open Science practices

In March this year I was fortunate enough to be a participant on the Plant Functional Trait Course (PFTC) in Wayqecha, in the Peruvian Andes to learn about trait-based plant ecology (Figure 1). I imagine you may be wondering what a field course has to do with Open Science. This course was designed to teach ECRs the skills of field-based trait measurements and analysis in a systematic and reproducible way (e.g. following protocols, data documentation, well documented reproducible code, etc) - all of which are elements of Open Science. The course began online in late January with weekly lectures where we were introduced to key topics in trait-based ecology, FAIR research practices and our research teams. Each of the research groups focused on different questions and hypotheses related to plant traits along an elevational gradient from individual trait variability, ecophysiological traits to the remote sensing traits. As a team, working remotely, we set out a clear approach to test our hypotheses before we all met to collect data in Peru in March. Our team was investigating the thermal responses of a grass and forb species with increasing elevation. Collectively, all the teams managed to gather some useable data before the course abruptly ended due to COVID-19. Whilst navigating COVID travel bans to return back to our home countries and some us remaining in lockdown in Peru, over the coming weeks we managed to finish the course online and meet the course objectives.

The course fostered a strong sense of community from our shared interests in plant trait ecology and Open Science, but also the shared experience we faced with the COVID disruption. In the coming months, we came to appreciate that the course design of having pre and post online elements conferred a level resilience against the pandemic when teaching became remote. Some of us took the opportunity to share our experiences of this course in the form of a paper. In our article: Next‐generation field courses: Integrating Open Science and online learning, we make the case that incorporating Open Science and online elements into field courses can greatly enhance ECR learning outcomes (Figure 2). Field courses are a staple in the fields of ecology and evolution for ECRs which creates an excellent opportunity to learn and implement Open Science practices. 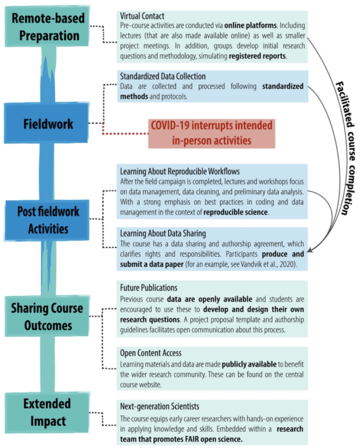 These past two years have opened my view of research culture and practice from my experiences in researching, attending courses and events and writing about Open Science. Despite wishing I had been taught these practices earlier in my science career, I remain grateful for the opportunities I have had to engage with Open Science. I urge other ECRs to actively engage and implement these research practices and for lecturers/PIs to teach Open Science - opening the door for the next generation of researchers to expand their skills sets in open and reproducible research.